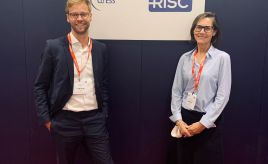 After two years of online meetings, the CoESS Monitoring and Remote Surveillance Committee met again in person under the Chairmanship of Antonello Villa (Federsicurezza, IT) to discuss those topics that have much defined the associations activities over the past year and will continue to do so.

Hosted by CoESS British member BSIA and under participation of the leading private security companies and experts across Europe, the Committee members discussed a wide range of issues, including cyber-physical security, standardisation in remote surveillance and monitoring, as well as EU Affairs dossiers such as the EU AI Act.

The matter of cyber-physical security isn’t a new one. It was already back in 2019 when CoESS published together with Euralarm highly valuable cybersecurity guidelines for the security services and fire alarm industry. Based on these guidelines, the Remote Surveillance Committee will continue working on the matter, raising awareness on the importance of cyber resilience and its interdependence with physical protection – and issue which is also currently on the EU agenda with the recently adopted NIS 2 Directive and the future Directive on the Resilience of Critical Entities.

The meeting took place in London at IFSEC International 2022 – one of the worldwide leading security and safety fairs – where BSIA had its own booth, presenting a highly value report on video surveillance in the UK.