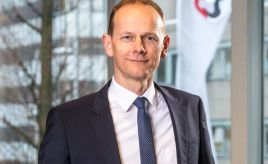 Supported by a unanimous vote, Vinz Van Es said: “I feel both honoured and sad. Honoured by such great support from both the Members and the Board, and sad to see Marc stepping down after all his achievements on behalf of CoESS. He is leaving big shoes to fill, and I count on the Committees’ support to help me in my task.” Marc Pissens promised to stand ready “to continue serve on the Board as Honorary Chairman”, indicating that he would remain one phone call away and ready to offer support. He also expressed full confidence in the new Chairman in steering CoESS into a new era.

Marc gave a few highlights of the history of CoESS, which he felt very satisfied about, including the professionalisation of private security with licensed and adequately trained officers, the publication of the Best Value Manual, the commitment to produce high-quality standards, the financial sustainability of CoESS, and the motivation of Committee members. He recommended that in the future more efforts be made to demonstrate the added value of CoESS to the members, and encouraged the National Associations to promote the association’s work at EU-level to their members. He felt that with a roadmap for the future, CoESS would stay on track thanks to the excellent team in the Board of Directors, and the CoESS staff. “The journey is not finished, it’s just started. Don’t forget that at the centre of everything, the industry and the association are its people and that’s what matters most”, he said before handing over to the new Chairman.

Vinz expressed the Board’s frustration that this transition was taking place during an online webinar, as Marc would have received a long and warm standing ovation if the meeting would have taken place, as it always did, in real life. He thanked Marc for his 18 years of commitment as the President, and for laying down strong foundations to continue to build on. He planned on working closer together with the National Associations, to have a deeper understanding of their needs and stimulate an exchange of intelligence and best practice between them. He also felt ready to take the next steps in the integration of technology, examine the role of CoESS in the "new" new normal, and how the new realities of the industry should be reflected in the organisation’s structure and work.

Harald Olschok, CEO of the German Bundesverband der Sicherheitswirtschaft (BDSW), a founding member of CoESS, shared memories about the inception of CoESS, and emphasised the incredible work carried out under Marc’s inspiring leadership: the Security Summits, the White Papers, the publication of Facts and Figures, the creation of the Working Committees, hiring a full-time Secretary General, etc. – in short transforming a small volunteer-only association into a professional and respected trade and European Social Partner association. Harald emphasised the personal and professional qualities that made Marc the right person to guide the professionalization of CoESS: “Marc is inspirational, multilingual, diplomatic, has worldwide experience and a vast network, which he put at the disposal of CoESS, to ensure its financial sustainability and acceptance by politicians, and hired the right people to execute his and the Board’s vision.”

In addition to the new Chairman, several new members step on the CoESS Board: