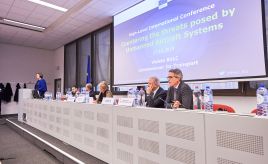 The European Commission organised in a joint effort of DG HOME and DG MOVE a high-level international conference to discuss ways to counter the threat of Unmanned Aircraft Systems (UAS) in Brussels. During the event, the “European Drone Investment - Advisory Platform” was launched with the European Investment Bank to support innovation and investment in drones.

CoESS was invited to speak during the high-level event that included speakers such as Commissioner for Migration, Home Affairs and Citizenship Dimitris Avramopoulos, Commissioner for Transport Violeta Bulc, and Commissioner for the Security Union Sir Julian King. The conference was attended by industry experts and government delegations from EU Member States, the United States of America, Australia, Canada and Israel.

Alexander Frank, Head of EU Affairs, took the opportunity to stress that drones represent both a security challenge and a solution. For private security companies, they are a useful addition to the range of technological means and equipment in use, which can significantly enhance public security. Operations with drones are particularly suitable in Critical Infrastructure and the private security industry sees many different opportunities with UAS that enhance public security. They make the missions of guards and LEAs safer, more secure and more efficient – from surveillance and reconnaissance missions to alarm response, search and rescue.

Still, drones present a complex and diverse threat to the assets that private security companies protect. They can be used for surveillance, espionage and smuggling. But they can also be used as a weapon, in the worst case with a payload of explosives or CB agents. Alexander Frank highlighted that the available solutions to this threat are not only of technological and legal, but also of operational nature. For example, infrastructures like airports, seaports and large refineries are requested to take measures against drones, but they can only detect and inform LEAs about unwanted drone activities. It is then important that LEAs can use at very short notice the required mitigation measures. Such reaction times can sometimes be less than a minute. So the question is: do LEAs have the capacity to protect all important Critical Infrastructures, public spaces or mass events in a sufficient way?

If not, private security companies could be authorised to take site- and risk-specific neutralisation measures under LEA control and approval. It is however up to Member States to decide whether non-LEA actors should have competencies for the response and interception of drones – based on legal frameworks as well as technical, operational, qualitative and quantitative capacities. Mr. Frank highlighted though that, if private security companies shall take over such responsibilities, they would require a fair third party liability regime on national level to avoid that private operators, including airports, for instance, overtake unlimited liabilities. Further, clear roles, responsibilities and communication channels would have to be established between LEAs, air traffic control, operators and actors in the security supply chain. What is required is a mindset that recognises the need for an efficient Security Continuum and public-private partnerships from joint vulnerability assessments to contingency plans (see our recent White Paper on the Security Continuum here). A basic requirement for this to work out is, however, the professionalisation of buyers and mandatory uptake of 60% quality criteria in the procurement of private security services in Critical Infrastructure (see the CoESS call for action here).

Alexander Frank further insisted that private security companies have to be treated differently from other commercial UAS operators. EASA should, for example, establish sector-specific Standard Scenarios for private security monitoring operations as they exist in France already. Further, investment in effective C-UAS technologies is required.

Commissioner Avramopoulos confirmed that the European Commission will continue its efforts to conduct systematic threat monitoring, invest in ISF funding into the testing of C-UAS technologies, and will support the exchange of best practices with Member States. Commissioner Violeta Bulc referred to ongoing, important legal actions such as the U-Space Regulation and Aviation Security Framework, and confirmed that we need to have efficient risk and contingency planning against malicious drone operations in place.