BDSW: Historic day â private security services industry will be regulated by the German Federal Ministry of the Interior 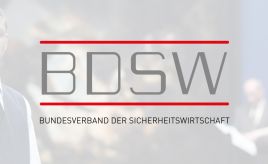 Berlin/Bad Homburg – The private security services industry was regulated by the Ministry for Economic Affairs for 93 years. From July 1st, 2020 the Federal Ministry of the Interior will be in charge of regulating the industry. This was announced by Federal Minister of the Interior Horst Seehofer in Berlin today. “The BDSW welcomes this change. So, one of the associations most important demands has been fulfilled,” said President Gregor Lehnert in Berlin today. He added that the significance of the private security services industry in the security architecture was becoming politically visible now. Gregor Lehnert thanked everyone involved – at federal and state level – who contributed to this change. He also thanked the economic authorities explicitly. The security industry with its almost 270,000 employees had been of outstanding importance for internal security in Germany in the past one to two decades. “The regulations of the commercial law were no longer appropriate. Besides Austria, Germany is/was the last country in the EU where the private security services industry was regulated by the Ministry for Economic Affairs. We now need a Security Services Act as a specific legal basis for our activities in the area of ââresponsibility of the interior authorities,” Lehnert said.

The change was likewise welcomed by Friedrich P. Kötter, member of the Board of Directors of the KÖTTER Security Group, Vice President of BDSW and member of the CoESS Board of Directors. "With the change of responsibility from the Federal Ministry of Economics and Technology to the Federal Ministry of the Interior, Germany is now following the successful example of almost all its neighbouring European countries and thereby fulfilling a long-standing wish of the security industry, for which our company and our Federal Association has been campaigning for many years", he said - showing himself convinced that the future responsibility of the Federal Ministry of the Interior and the Security Services Act, also announced by the Federal Government, will raise the bar in quality standards in the industry even higher: "This was explicitly emphasised by the Federal Minister of the Interior Horst Seehofer in his statement, about which I am particularly delighted." (see full statement here)

The new security services act must above all contain new regulations concerning the access to the industry. "We need practice-oriented basic training instead of the course of instruction of 40 hours provided by the chambers of commerce and industry," said the BDSW President Lehnert. This training should not be offered exclusively by the chambers. "Certified security schools can also conduct this basic training competently and reliably."

In order to facilitate the licencing of the employees, there should be no multiple background checks with the same content. "It is unacceptable that four different background checks are required for the same employee to perform just one function," Lehnert criticised. A new legal framework must also include the obligation of in-house security personnel in sensitive security areas to comply with the same requirements as private security companies, as well as changes in public procurement practices, Lehnert concluded.

In June 1901, the first security company in Germany was founded in Hanover, the Niedersächsische Wach- und Schließgesellschaft. The Kölner Wach- und Schließgesellschaft followed a little later in Cologne. From the very beginning, the founding fathers were aware that an association was essential to assert collective interests. Therefore, on October 24th, 1904, the Zentralstelle der vereinigten Wach und Schließgesellschaften (“Cologne Association”) was founded, the BDSW is its successor organisation. On April 26th, 1909, the Cologne Association demanded a licence requirement for the security industry for the first time. It then took another 18 years for the Reichstag in Berlin to pass Paragraph 34a on February 7th, 1927, thus introducing a licence requirement for operators of security companies into the commercial law.

Private security service providers in Germany employ about 270,000 employees nationwide today. In 2019, according to initial estimates, a turnover of approximately EUR 9.25 billion was generated – the cash-in-transit segment accounted for around EUR 613 million and the aviation security segment for EUR 962 million, a total of EUR 1.5 billion. The companies organised in the BDSW offer high-quality services primarily. These include protection of power plants and other critical infrastructure facilities as well as the protection of military properties, reception services, qualified property and plant protection services. The combination of modern security and surveillance technology with personnel services ("integrated security solution") is becoming increasingly important. The turnover is approximately EUR 900 million.