CoESS General Assembly 2022: The security industry in times of disruption and change 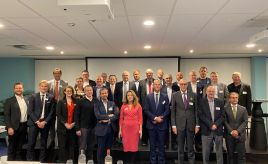 For the first time since three years, private security associations and experts from all over Europe assembled again in Brussels for the CoESS Annual General Assembly.  During the meeting, CoESS members from 23 countries re-elected the association’s Board of Directors. While the internal organisation is marked by stability and continuity, the discussions at this year’s meeting were also clearly marked by change: new threats to Critical Infrastructure; labour shortages in the security sector and inflation; and the regulation and integration of new technologies into security services. One message was clear: collaboration of national associations at EU-level is more important than ever to tackle the complex change that our industry is facing.

Particularly the topic of the protection of Critical Infrastructure was at the centre of discussions. Not only due to the attacks on the NordStream 2 pipeline in the Baltic Sea and the sabotage of train traffic in Northern Germany in October 2022. Just prior to the General Assembly, European Parliament and Member States agreed on the final text of the future EU Directive on the Resilience of Critical Entities – I have reported on this dossiers in the 02/2022 edition of the magazine.

The agreement includes a recommendation to operators of Critical Infrastructures to consider external service providers as critical personnel and to control the quality of their staff’s training and qualification, for example with the help of Standards – a major success for CoESS who has lobbied for the inclusion of such provisions since 2016. It is the first EU law recommending quality control provisions for private security services.

The legal text is expected to be adopted in European Parliament and Council in December 2022. It is then on national governments to transpose the Directive – with the option of making the recommendation for quality control legally binding. National governments could, for instance, make quality control of security services based on the Standard EN 17483-1:2021 (private security services protecting Critical Infrastructure) legally binding.

In a Council Recommendation from 18 October 2022, the European Commission already called upon Member States to rapidly transpose the Directive into national law in the face of the increasing threats to Critical Infrastructure as a result to the Russian war against Ukraine. Just three days later, European heads of government  committed to such an early implementation in the conclusions of the European Council summit in Brussels. CoESS will therefore work with national associations on how to continue the work of CoESS now at national level, with the goal of translating the recommendations of the EU Directive in mandatory quality control provisions mandatory in EU Member States.

Another important topic of the assembly was the integration of new technologies such as drones an Artificial Intelligence (AI) into security services. Particularly the topic of AI received detailed attention during a dedicated panel debate between Kai Zenner, Digital Policy Expert in the office of MEP Axel Voss (EPP), Pauline Norstrom, AI Expert from CoESS’ British member association BSIA, and Alexander Frank, Head of EU Affairs at CoESS.

CoESS is since more than two years very engaged in the debates at EU-level around the future EU Regulation on the use of high-risk AI and respective liability rules. While for many, the use of high-risk AI is dreams of the future, technological change is happening rapidly and we need to make sure that EU legislation that, once decided in Brussels cannot be changed anymore at national level, promotes also innovation and legal certainty in our industry.

Several case-studies of the use of AI in security services were presented by Alexander Frank, such as in risk analysis, alarm triage, access control with the help of biometric verification, and automated prohibited items detection in aviation security. Kai Zenner presented the view of the EPP Group and raised alarm bells that the current deliberations in European Parliament may hinder innovation through exaggerated prohibitions of biometric technologies and administrative burdens. Pauline Norstrom promoted the guidelines on the legal and ethical use of Automated Facial Recognition Technologies, which were developed by the BSIA, were published afterwards by the British Ministry of Home Affairs, and are now the basis of a future Standard.

Re-election of the CoESS Board of Directors

Importantly, members also re-elected the CoESS Board of Directors, including Vinz van Es from the Netherlands as President. The only new member will be Wim Bartsoen, Chief Digital Security Officer at the Securitas Group, who will take over the chairmanship of the Monitoring and Remote Surveillance Committee of CoESS from Antonello Villa (ConFedersicurezza – Italy).

Fostering stability and continuity in the association’s management, Board members re-iterated that collaboration of national associations at EU-level is more important than ever. The EU-funded INTEL project on labour shortages proved to be highly useful in the exchange of best practices on how to tackle the issue. But more than that, legislation impacting the security services sector is increasingly drafted in Brussels – giving CoESS a rising responsibility to ensure a business environment that drives quality, professionalism and innovation for security companies.