CoESS: It is part of our mission to support the EU Counter-Terrorism Agenda 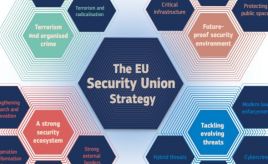 The European Commission recently published its “Counter-Terrorism Agenda for the EU: Anticipate, Prevent, Protect, Respond”. In the context of the new EU Security Union Strategy and the continued terrorist threat in Europe, the Agenda sets out a large number of relevant initiatives to better protect European citizens from acts of terrorism. As a member of multiple EU Expert Groups, including the EU Operators Forum for the Protection of Public Spaces, CoESS is committed to support this effort.

Public-private collaboration is key for effectively fighting terrorism in Europe. In the White Paper on “The Security Continuum in the New Normal”, CoESS stresses that cooperation between law enforcement and private security is an efficient enabler for a better protection of public spaces against acts of terrorism. CoESS is therefore glad that with the EU Counter-Terrorism Agenda, the European Commission confirms its commitment for a strong partnership approach with citizens, communities and other private partners, and takes a next, important, step in the EU’s Counter-Terrorism efforts.

The Agenda correctly assesses that the EU remains on high terrorist alert and that terrorists’ modus operandi are shifting towards attacks with easily available weaponry, conducted by individuals acting alone, often targeting public spaces – as sadly seen last year in a number of attacks in Nice, Vienna, and Hanau. Likewise, the European Commission rightly warns that stakeholders must also prepare for more sophisticated attacks, including malicious drones or CBRNe material.

Due to the wide range of public spaces that are protected by private security, our sector stands in the front-line of protecting the public against terrorist attacks in collaboration with law enforcement. Also, private security officers can play a key role in the anticipation and prevention of attacks, if an effective Security Continuum is established with public authorities and operators.

CoESS therefore considers it part of its mission to support the implementation of the EU Counter-Terrorism Agenda, also through our participation in EU Expert Groups such as the EU Operators Forum for the Protection of Public Spaces.

The Agenda is organised around four pillars: (1) ANTICIPATION, (2) PREVENTION, (3) PROTECTION, and (4) RESPONSE. It includes a number of actions to which CoESS can provide relevant expertise, namely:

-        Minimum obligations “for those that are responsible for guaranteeing the security of public spaces”.

-        Topical focus and EU-funding on the deployment of new security technologies and AI, measures against malicious drones, CBRN, and cybersecurity.

Following CoESS’ strong engagement in EU Expert Groups and with the past European Parliament’s Special Committee on Terrorism, we are strongly committed to supporting the EU Institutions in their effort to better protect European citizens, including better anticipation and prevention of terrorist attacks.

In the end, much depends also on the work on the ground: Member State authorities should promote effective cooperation with private security in a Security Continuum (see the CoESS White Paper on “”The Security Continuum in the New Normal”). Two million private security officers are active in Europe, of which 1.5 in the EU. They are deployed in locations where police are not necessarily, and certainly not permanently, present. To tap into the potential of millions of eyes and ears is an opportunity that authorities must seize – by focusing on quality when procuring security services (and not the lowest cost only) and by creating public-private partnerships with agreements for the exchange of information.

The convergence of the professionalisation of Private Security, its willingness to positively contribute to the Security Continuum and the increasing technological dimension of security solutions creates perfect conditions and timing for an optimised partnership. In many countries like Spain and the UK, authorities are already reaping the benefits of such partnerships. In other countries, it is high time for a paradigm shift.