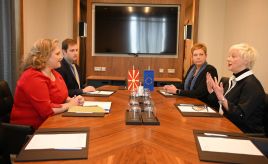 “One of the main areas for Critical Infrastructure Protection is that of Public-Private Partnerships”, said Ms Slavjanka Petrovska, North Macedonia’s Minister of Defence, while opening the conference on CIP organised by the Macedonian Private Security Chamber on 23 November.

The Minister of Defence, who is in charge of the protection of Critical Infrastructure and is currently preparing legislation on the matter, highlighted the role played by private security, as part of the whole national security system. She also mentioned the physical and cyber dimension and the potential impact of attacks, a concern that has even risen further to the Russian war on Ukraine.

Catherine Piana, CoESS Director General, presented the new EU Directive on the Resilience of Critical Entities and the work that CoESS has accomplished in the last years to reinforce the quality of private security services that protect CI. She also presented the ongoing work at the European Standards Body, CEN, to build a whole standard system for private security companies active in CIP.

The conference gathered key stakeholders from public authorities and the private sector, as well as academia. The Chambers of the region – Croatia, Serbia and Slovenia - brought their experience and feedback, to compare different legal systems in place.

Catherine Piana and Verica Mileska Stefanovska, the President of the Macedonian Chamber, had the privilege to meet in private with the Minister of Defence to emphasize the role of private security in the protection of society and its infrastructure and the need to reflect this in the laws that are drafted, not just about CIP but also about crisis management.

The CIP Conference was organised in the context of a yearly campaign on private security, named “Live Safely” that includes an exhibition in a shopping area of Skopje, highlighting the role played by security actors to the benefit of society as a whole.

CIP is very high on the agenda of CoESS and its members, in view of the transposition of the CER Directive, which will start shortly after its final adoption in December.