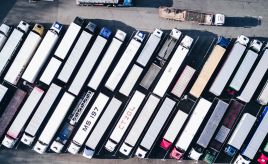 EU Commissioner for Transport, Violeta Bulc, received a call for action by European social partners European Transport Workers’ Federation (ETF) and International Road Transport Union (IRU) to move forward in the creation of a genuine network of safe and secure truck parking areas. In their statement, both organisations stress that “drivers’ security has deteriorated to a point where one out of four drivers has been victim of a violence or attack”.

IRU and ETF refer to a study financed by the European Commission making concrete proposals to create an EU-wide network of safe and secure truck parking areas (SSTPAs), including an EU-parking standard to which truck parking areas should be raised up to. According to ETF and IRU, it would be “imperative to improve security, sustainability and safety of European mobility chains, and, through that, the welfare and wellbeing of European citizens” by means of support, funding and policies with close involvement of the security community. The European Commission should present a multi-year plan for the next legislature and make more funding available to address the issue.

CoESS strongly supports this call for action and has already highlighted in its White Paper on Best Practices in Transport Security that past incidents, including crime against drivers, theft of cargo, illegal migration and the hijacking of a truck prior to the attack on a Christmas Market in Berlin, show that the physical security of drivers is at risk due to new threat developments.