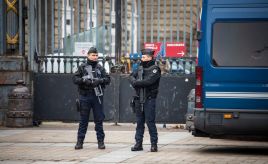 The representatives of Private Security (SNES, USP and the CDSE) and the Ministry of Interior signed a Protocol allowing the exchange of operational information between the Interior Security and private companies at the local level. The signatories have been working on this agreement for several months. It gives substance to the “security continuum”, which French MP Alice Thourot, the rapporteur of the Parliamentary Committee on this issue, has been supporting. She announced the Protocol’s finalization shortly.

The document concretely aims to designate local reference contact persons and representatives of PSCs, as well as Security Directors.  SNES, USP and CDSE will have to come forward with a list of local points of contacts.

CoESS has been supporting such type of formal exchange of relevant information between public and private security players, in order to optimize their response in case of incidents, such as terrorist attacks.